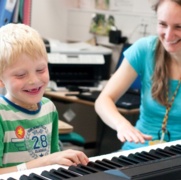 Becca is based in Cardiff and works with adults with autistic spectrum conditions and children with autism in school.  She also runs a singing group for people with lung conditions. The thing that Becca loves the most about being a music therapist is being able to almost instantly make a connection with someone through music. A lot of her work is with people who struggle to communicate through words, either from disability or trauma, and Becca finds it such a privilege to be able to build a relationship with them through the sounds and music that they make together.

During her nine years living in Cardiff Becca has worked with incredible people - from babies to 100 year olds, in care homes, schools, and through third sector organisations. Before moving to Cardiff, Becca lived in the North West of England and worked with children and adults, in schools, hospitals, and care homes. Becca originally qualified as a music therapist at Guildhall School of Music and Drama in London in 2003 and then ‘progressed’ that diploma to an MA in music therapy in 2014 at the University of the West of England.

Becca also has a private practice where she supervises other music therapists.  She is the chair of the Wales Arts Therapies Advisory Forum, and one of the Wales area coordinators for the British Association for Music Therapy. Becca enjoys connecting with other arts therapists and thinks it’s really important to support each other, as working in such small professions can be isolating.  Being part of a cooperative with other arts therapists has been a brilliant experience for Becca to design projects and work with drama and art therapists.