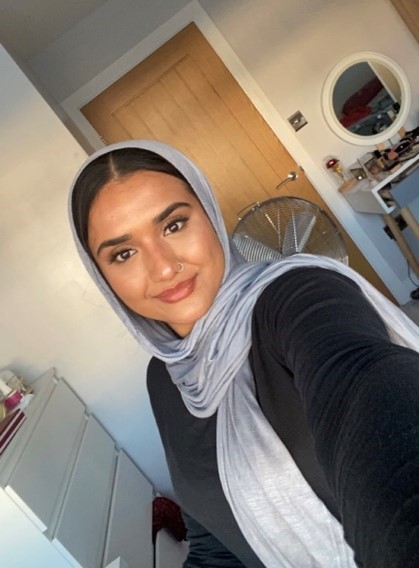 During summer 2022, HEIW took on 15 students for an eight-week internship. They each spent time in a specific department within HEIW to gain an insight into what it’s like to work for the NHS in Wales.

Here you can read about Nazia’s internship experience at HEIW.

My name is Nazia and I am a second year Optometry student at Cardiff University.

My internship has taken place with the Optometry team here at HEIW and I am working on finding gaps/areas of improvement within the pre-registration programme by gathering information from supervisors and pre-registration students.

I found speaking to people higher up in the organisation quite daunting, but everyone was amazing. As I did more of it and settled in, it became more normal, and I’ve learned lots about myself. My mantra has been ‘just fake it until you make it’.

I initially wanted to do this internship to see what was out there other than clinical optometry. The HEIW optometry team are amazing and they do all sorts of different work. It's been really insightful.

My project was to identify areas of improvement within the pre ref programme for optometrists. I engaged with all the different people involved such as the supervisors, the newly qualified optometrists, and the pre-registration optometrists to get their opinion and what they think of the programme to identify gaps that needed improving upon.

The aim of this was to pass on my findings to enhance the pre reg programme for future optometrists such as myself.

I created a survey on Microsoft forms for the pre reg students and the newly qualified optometrists. This was a quick and easy tick box survey so we can get an idea as to what they think and what they've experienced throughout.

Whereas for the supervisors I created a more open style questionnaire and arranged around 20-minute meetings on Microsoft Teams to go through the questions. This allowed me to grasp a more in-depth analysis of what they thought.

I found a couple of things that have recurred throughout the different conversations that I've had, and within the data from the survey. One thing I have found that both the supervisors and the students have felt as if enough learning materials have been provided. This shows that this area is doing well and doesn’t need to be focused on as much. However, on the other hand, another thing I have found is that the students didn't understand the role of their supervisor and thought of them more as a teacher as opposed to being a mentor. This highlights that the students may feel unprepared for their pre-reg year and is an area that HEIW or universities can work on improving.

Outside of work and university

In my time outside work and university, I enjoy spending time with family and friends. I like to go out to try different foods and go for nice drives.